Nowadays, there are about 700 programming languages and even a bigger amount of frameworks. Some of them slowly degrade, some are a step away from extinction, and some are still growing. We’ve done all the hard work for you analyzing current trends on the market, and narrowed down the list so that you can easily pick the most scalable technology that suits your needs best. Keep reading this post to find out top programming languages and frameworks for software application development for the next 5 years. The choice in favor of any technology from our list will guarantee you a top-notch application that won’t face maintenance, scalability or service issues.

Before considering which technology to choose for your software, please take into consideration the following criteria:

Since its release in 1995, Ruby gained a lot of devoted coders. It is a dynamic, open-source programming language focused on simplifying programming work. Interesting fact: Yukihiro Matsumoto, Ruby’s chief designer, in his interview once said: “The goal of Ruby is to make programmers happy”. Ruby was created to increase developers’ productivity and was ranked as the 9th most popular programming language by Stack Overflow in 2019. 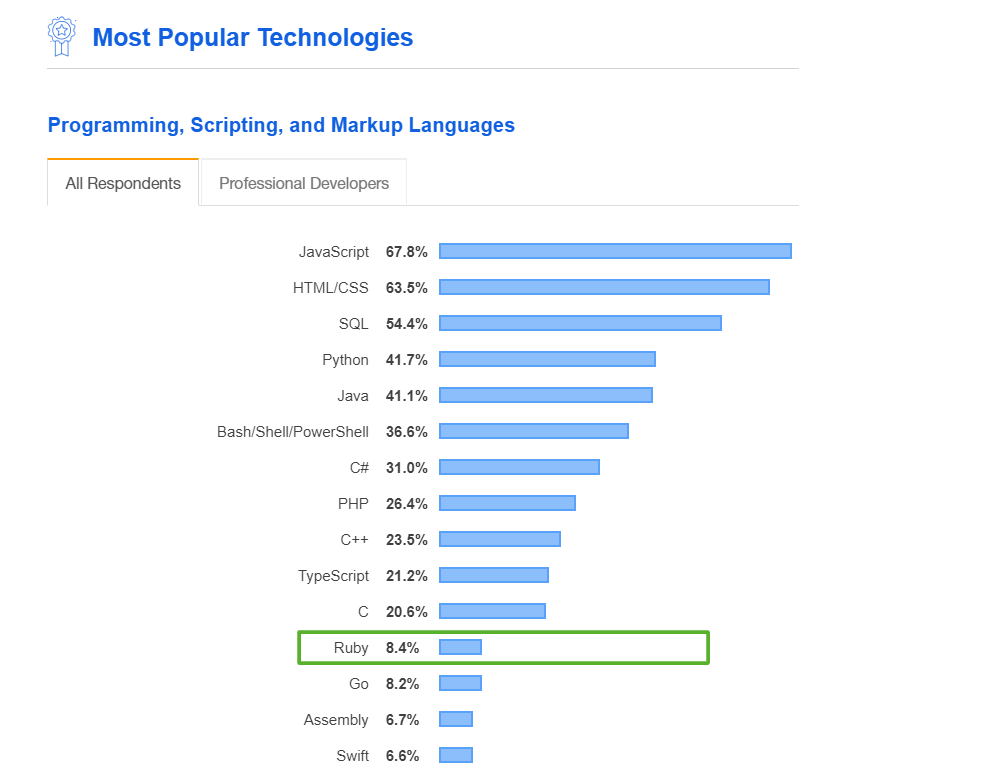 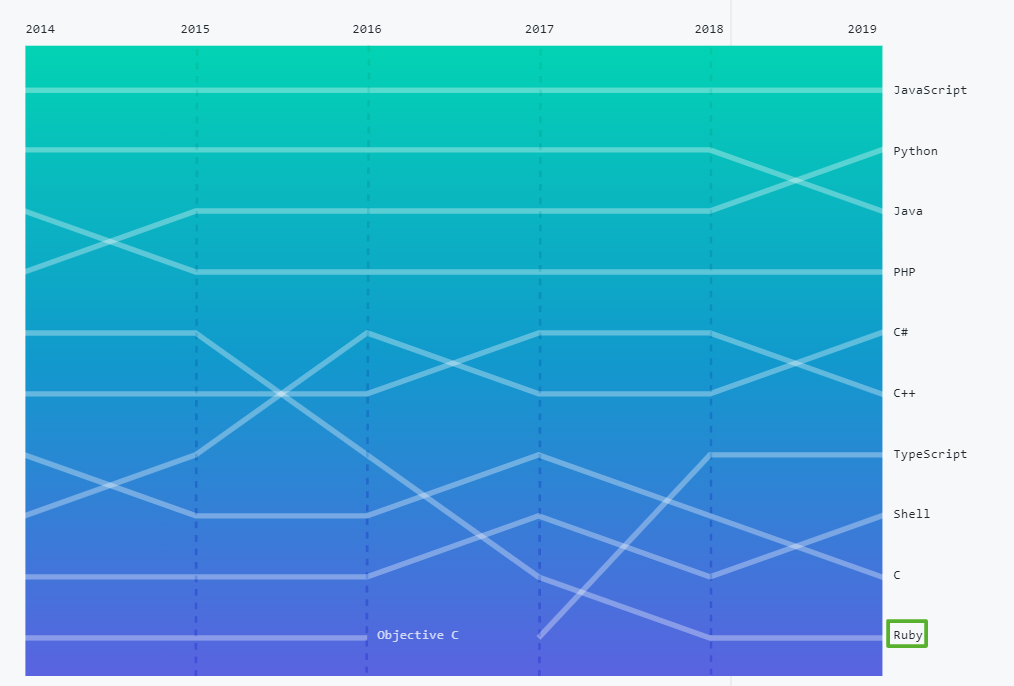 One of the main reasons behind Ruby’s popularity is its server-side open-source web application framework Ruby on Rails. It has an excellent ecosystem full of tools and support necessary for developers.

It seems that PHP is losing popularity, but it is not true according to PHP usage statistics. W3Techs, an extensive and reliable web technology survey, reports that PHP is used by 78,9% of all websites with a known server-side programming language. PHP stands for Hypertext Preprocessor and was developed in 1995. Originally it was created as a set of Common Gateway Interface binaries with the main purpose of developing dynamic web apps. However, it kept on evolving and eventually became a fully-fledged programming language.

When speaking about the popularity of PHP, it’s worth mentioning that PHP made it the top 10 on the list of most popular programming languages in 2019 according to the results of the Stack Overflow’s annual survey conducted among 90,000 developers worldwide. 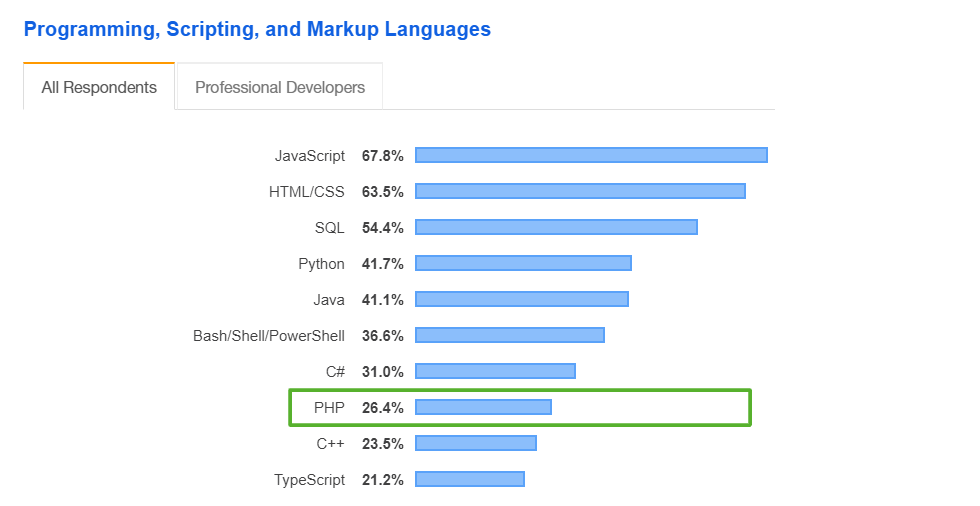 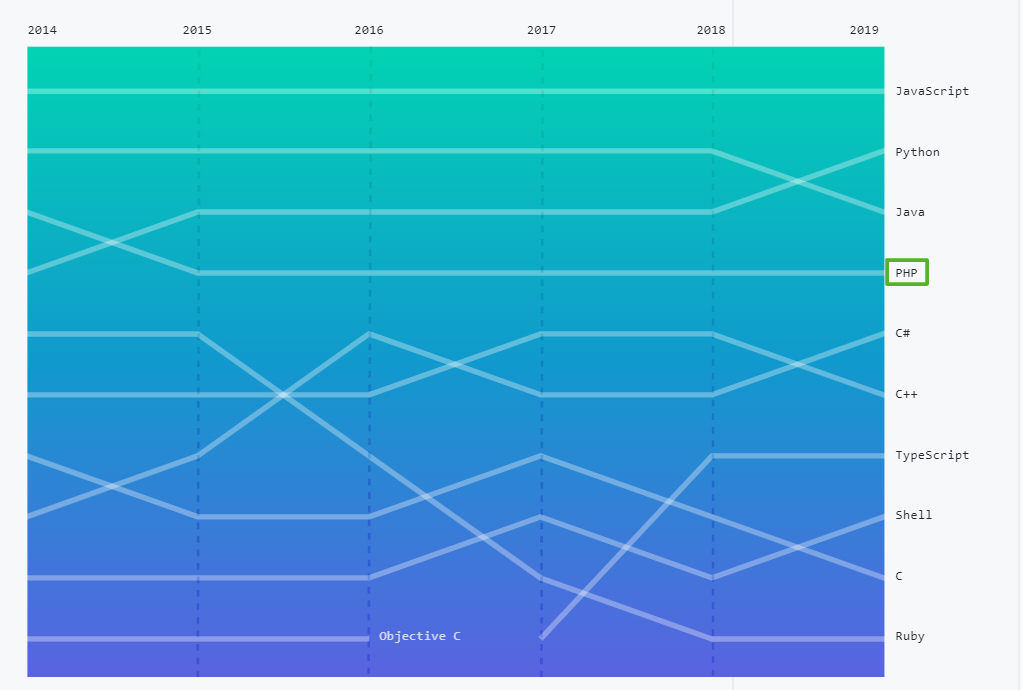 Leobit’s team has vast expertise in using PHP for web application development. One example of Leobit’s PHP projects is a real estate portal for the US market. The developed platform provides users with great workload mobility, increased performance, and 3rd party integrations that shows additional data about the property.

Real estate portal for the US market

Python is the fastest-growing first-class programming language for backend development. Its rise in recent years can be explained with the emergence of Artificial Intelligence, Machine Learning, Big Data, and Robotics, as Python is the most preferred language for developing applications based on these trending technologies.

The popularity of Python is not going to slow down. According to Github’s PYPL rating, Python is the most in-demand programming language for 2020.

Stack Overflow’s Annual Developer Survey conducted among 90,000 developers worldwide listed Python as the 2nd most loved and 4th most popular language in 2019. 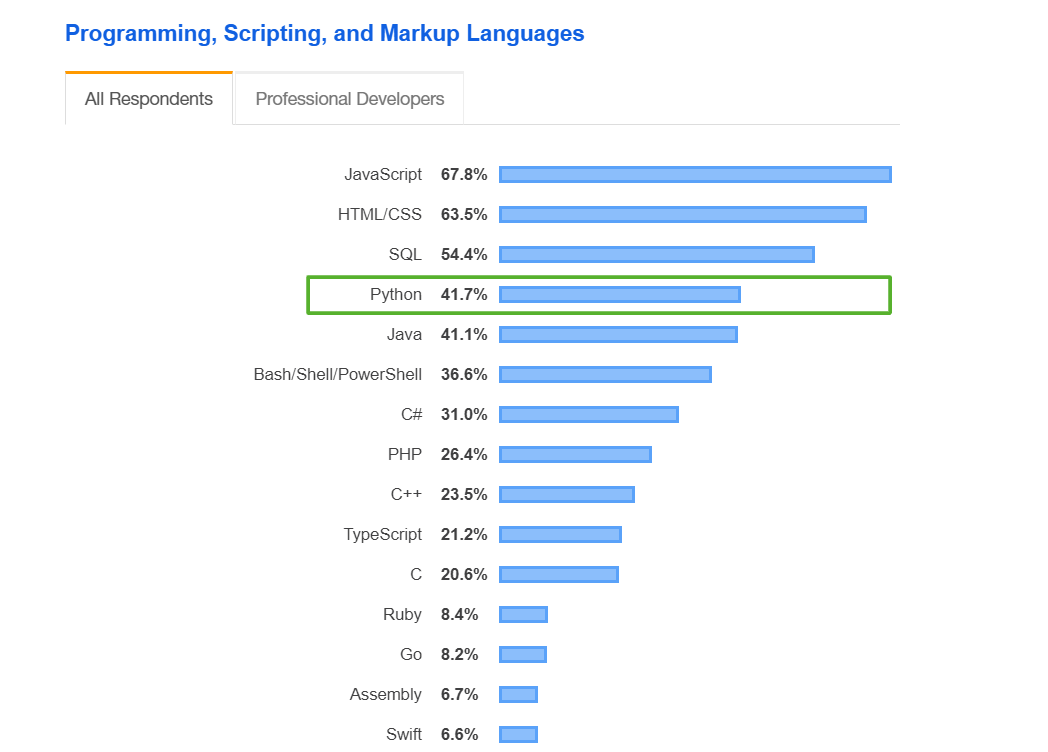 A lot of today’s most famous websites were built using this language, including Instagram, YouTube, Google, Spotify, Netflix, Uber, Dropbox, Pinterest, and Reddit. What other proof of Python’s popularity is needed? Leobit’s engineers also have a profound experience in creating web applications using this language. Our Python developers created a solution, called NewsDetect, that collects and analyzes thousands of articles every day from different platforms and defines news tonality: positive, negative or neutral. It also allows to monitor trends in the media world and track statistics about daily changes in news tonality. This web application was built with Python on top of the Django web framework and is unique on the Ukrainian market.

Swift is a multi-paradigm, general-purpose, compiled programming language developed mainly as an alternative to Objective-C in the development of native iOS and Mac OS apps. It is a relatively young language released in 2014 by Apple Inc. However, Swift already can be considered the primary programming language for iOS application development that is going to displace its predecessor, Objective-C, in the near future.

Talking about the popularity of Swift, it’s worth mentioning that Swift got listed on the 6th position in a category of the most loved programming languages according to the 2019 Stack Overflow’s annual survey. 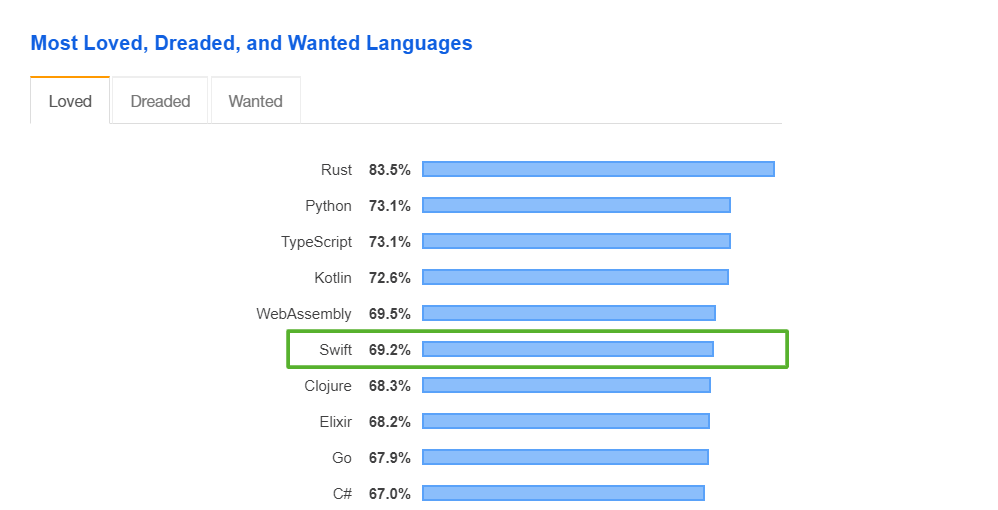 Also, Swift made it Top 10 on the list of popular ranking website PYPL. Taking into consideration how young Swift is, this is definitely an achievement. 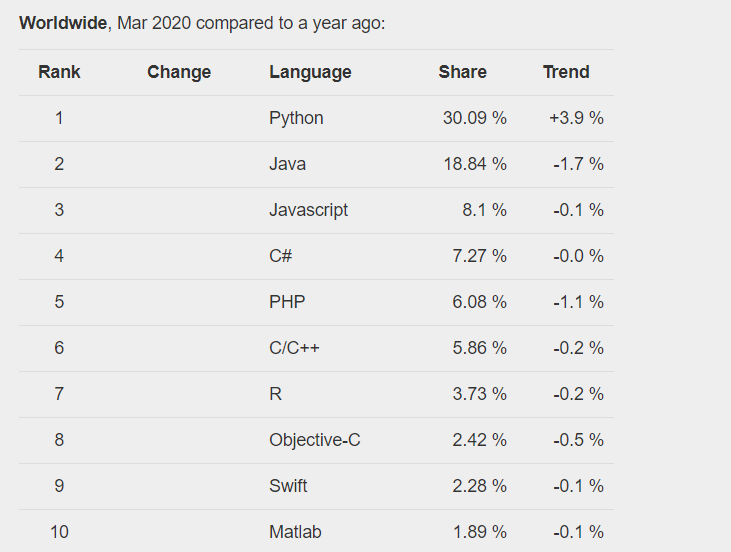 As Leobit specializes in web and mobile application development services, we built many iOS apps. An innovative real-time marketing solution is an example of the application our team built with Swift.

Kotlin was developed by JetBrains as a language that would displace Java in Android application development. Kotlin completed its mission and was announced by Google as a priority language for Android development in 2019. Kotlin is much simpler than Java, and, at the same time, it is more productive thanks to its clean and concise code. Kotlin also outperforms Java in Android application development as it was built specifically for Android, whereas Java is a general-purpose language.

Kotlin is the most promising programming language for mobile development, which can be explained with the constantly increasing number of Android users worldwide. Only in the United States, this figure reached 124.4 million users in 2019 according to Statista report. Stack Overflow survey featured Kotlin as the 4th most loved programming language among developers. 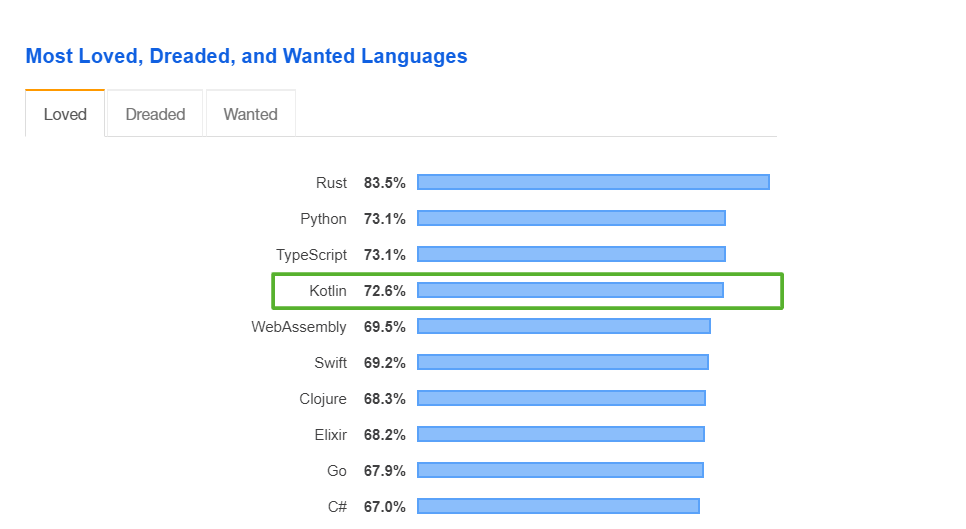 Leobit’s experts have a great experience with using Kotlin for Android application development. For example, the Android fitness application developed by Leobit’s team engages users in walking and is a part of the Norwegian public healthcare initiative.

.NET Core is a high performing cross-platform framework released and maintained by Microsoft. It is written in C# programming language and helps to build robust web applications. .NET Core is a modern replacement of .NET Framework with some new additional and enhanced features. It is a good choice for those who want to develop modern applications that can be deployed in a cloud environment.

.NET Core should be on your top consideration list as it is the third most commonly used framework 2019 in the list provided by Stack Overflow. What is more, 77.2% of developers voted for .NET Core placing it in the first position in a category of the most-loved non-web frameworks.

A great example of an application powered with .NET Core framework is indoor and outdoor cycling solution developed by Leobit. The application helped our customer’s company to enter the global market and grow end product users by 10 times.

Angular is one of the most promising front-end web application platforms. It was developed by Google to build scalable and high performing web applications. The first version of Angular was released in 2010. The framework is written in JavaScript and designed with a particular purpose to simplify the process of creating user interfaces and overcome the restrictions of other existing technologies in one integrated package.

The ecosystem of Angular is thriving. It has an incredible amount of libraries and one of the biggest community of supporters on Github. Angular made the Top 3 on the list of 2019 most popular web frameworks by Stack Overflow. So it definitely should be on your web development framework’s list.

Using the Angular framework for front-end application development, Leobit’s experts created a customizable web CRM. This unique development solution allowed the customer to save $350,000 within the first 6 months after the implementation.

A web CRM for enterprises developed by Leobit

You can also check one of Leobit’s previous posts on why Angular + .NET Core combination is an optimal technology stack for your next web app development project.

If you already made up your mind or still need advice about choosing a language or framework, feel free to share with us your project details and our experts will promptly help you to pick the best-fitting tech stack.

Yurii Shunkin
CTO at Leobit
You can reach Yurii
via LinkedIn:
Share on FacebookShare on LinkedInShare on Twitter