Latin America, Eastern Europe, or Asia: Where to Outsource Software Development in 2020? 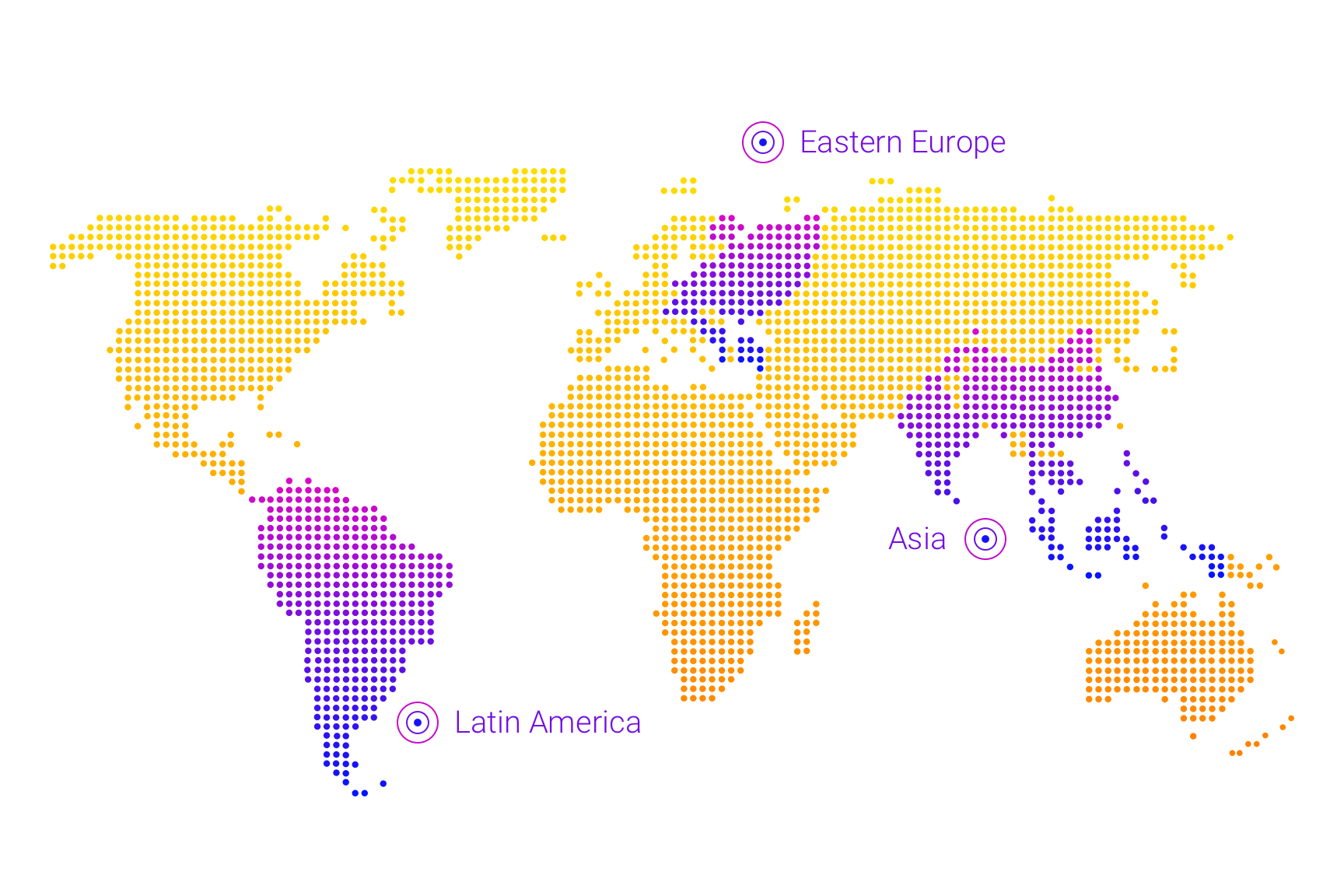 Even though the world is becoming extremely globalized, cultural, social, and business differences are still significant. Therefore, each time you start a business in a new location, hire remote employees, or outsource software development, it’s essential to evaluate a range of factors. Think about the language you’ll use for communication, time zones, cultural gap, salary expectations, local talent pool, and anything else applicable. A prioritized list of requirements will help you better understand what kind of software development services outsourcing you’re looking for.

Actually, there are no best-choice countries for outsourcing software development. Some destinations just suit your business needs more and already have an infrastructure for outsourcing programming services.

To help you make up your mind about outsourcing programming services, we’ve prepared a detailed overview of the most popular destinations with some 2020 industry takeaways. Keep reading to discover:

2020 has been harsh for everyone. It made many companies seek ways to optimize their expenses and review core operational approaches. The role of in-house teams and office spaces has plummeted, giving way to remote cooperation and outsourcing programming services.

And although the global economic downturn has slowed down the growth of software development outsourcing, the negative trends in this area are much less noticeable than in other fields. Actually, the demand growth for experienced software developers hasn’t changed much since 2019: 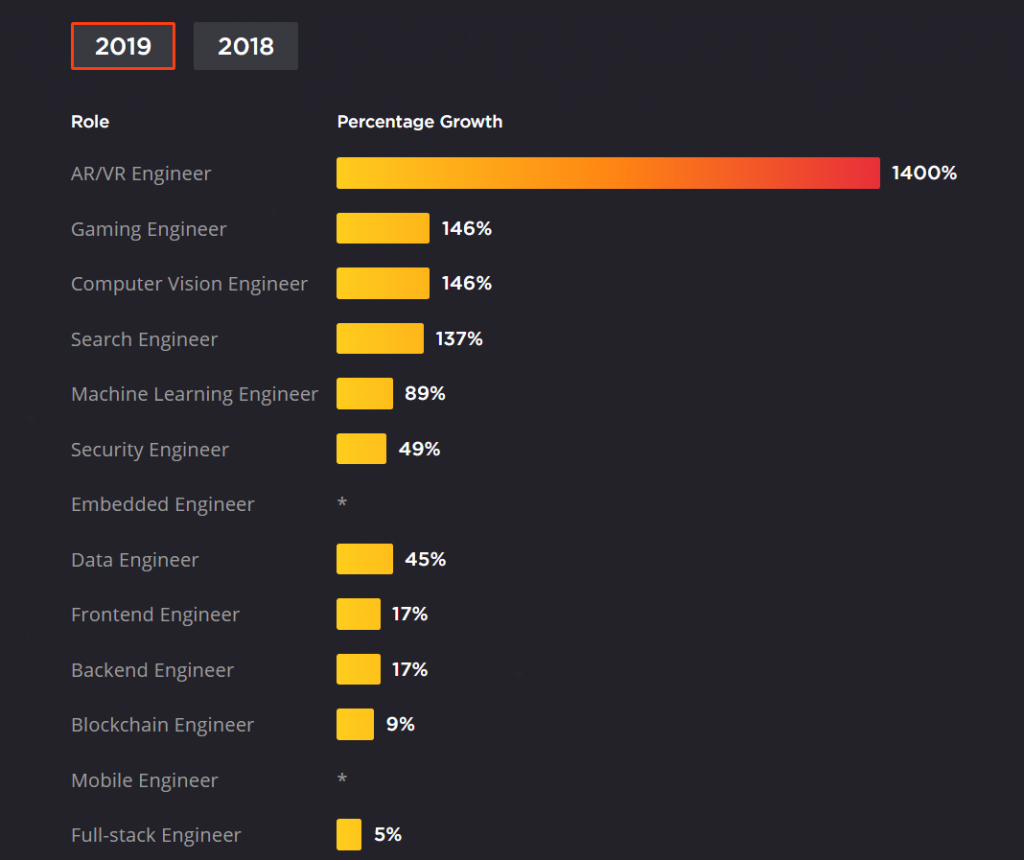 The large gap between business needs and the real capacity of the local labor markets remains in place. On Hired, an average Go developer receives 9 interview offers per year, whereas Scala and Ruby software engineers get 8.5 and 8.2 requests respectively. Hence, you may need to compete with up to 9 other companies every time you hire a new developer. This strains your resources and takes way too much time.

Under such conditions, the location of the potential employee or team is less critical than their expertise and availability. Outsourcing software development to Eastern Europe, Asia, or Latin America, companies get access to the local pool of candidates and can hand over a part of their everyday tasks to remote project managers. As a result, outsourced software development makes their business more cost-efficient, easy to scale, and flexible. Alibaba, Basecamp, Google, GitHub, Opera, and Skype are just some of the market leaders outsourcing software development to South America, Asia, and Eastern Europe.

When it comes to software development, Latin America is one of the top software outsourcing regions. It’s close to the United States, shares almost the same time zone, and offers numerous educational incentives for IT professionals. Thanks to a series of reforms introduced over the past years, the level of safety and infrastructure quality in this region have also considerably improved.

Despite the obvious advantages of the listed top software outsourcing countries, software development in Latin America may pose some problems. Taxation systems, as well as political and economic unrest, are the main drawbacks you need to take into account. Since tax policies significantly differ among the counties and are often ambiguous, you will have to spend some time figuring out how to organize the cooperation. Apart from that, the US and European customers often complain about the lack of punctuality and deadline issues.

Eastern Europe is a perfect match for Nordics and Western European businesses. Local developers have access to high-quality education in STEM disciplines – 30 out of 369 top European universities are located in this region. It takes only 1-2 hour direct flight to get to any Eastern European tech hub from other parts of Europe. Even though the trip from the US takes longer, a similar cultural mindset, overlapping working hours, and affordable hourly rates make it worth the effort. For example, software development in Ukraine will cost you from $20 to $50 per hour. It’s slightly lower than in Latin America and other Eastern Europe software development outsourcing destinations but no less professional.

In Eastern Europe, software development outsourcing is of high quality, affordable, and well-established. It may be more difficult for US customers due to time differences and large travel distances, but the right approach to cooperation can minimize these drawbacks. Therefore, the main risk you may face choosing one of the Eastern European top countries in the software industry is possible misalignment caused by poor management and communication.

Outsourcing Software Development to India and Other Asian Countries

Outsourcing web app development services to Asia, you need to be aware of several risks. First of all, some regions have insufficient levels of security, which may result in data breach or leakage. Therefore, you must ensure that the chosen location and company have proper data security measures in place. Significant cultural differences and the lack of overlapping working hours are additional factors that complicate outsourcing to Asia. Fortunately, many local companies adhere to flexible working schedules and use tried and tested software development outsourcing methods to minimize these shortcomings.

Web and app development companies constantly invest in the professional growth of their teams since the technical expertise of software engineers is key to release a stable and functional product that will gain popularity. HackerRank and TopCoder are the most popular outsourcing rankings used to compare major outsource software development destinations.

The success of outsourced software development heavily depends on your ability to communicate with a remote team. Everyday discussions and information exchange enable you to achieve the set goals and find common ground with developers. The outsourcing ranking below is based on the EF EPI Index, which is widely used to evaluate the English language skills of adult speakers. Yet it’s worth noting that in many countries, the level of English proficiency is much higher among tech specialists engaged in outsourced software development. Local companies offer free English classes several times per week to constantly improve the language skills of the employees.

Even though modern working approaches help to overcome time differences and make two remote teams largely independent, the time spent together still matters. You’ll need at least several hours per day to cooperate effectively and solve ongoing problems. In this respect, Eastern Europe is the most convenient destination for Western European businesses, whereas Latin America has an insignificant time difference with the US.

Tech talent pool of the top countries in the software industry

The scarcity of talents on the local labor market is a valid reason for outsourcing software development for many Nordics and Western companies. Especially given that outsourcing destinations have thousands or even millions of tech experts ready to accept remote offers.

Any business owner who seeks cooperation with a remote app development company should keep in mind cultural diversity. For example, some outsourced software development teams are more individualistic than others. The perception of power distance and uncertainty also differs. Hofstede Insights provides a great generalized picture of such traits.

Cost of IT outsourcing in 2020: Latin America, Eastern Europe, and Asia

The cost of outsourced software development is rightly one of the main outsourcing issues. The same quality for a lower price inspires many companies to shift their businesses to offshore or nearshore destinations. They get a chance to cut operational expenses and focus on their core business activities without wasting time on assembling an in-house team.

The cost of IT outsourcing services differs not only by region but also by countries. Developers’ hourly rates and accordingly the cost of software development services are influenced by economic factors such as a state of economic development, median costs of living, regional taxes, etc. Other factors that affect the software engineers’ wages are the state of the IT market inside the country and the demand for IT workforce, regional tech talent pool, average developers level of education, and their expertise.

It is well known that the most affordable software development services are offered by Asian IT outsourcing vendors. The large IT specialists pool and low living cost make the rates of local software developers lower compared to other regions. However, outsourcing to Asian vendors may bring some difficulties in further cooperation, e.g. lack of expertise and understanding of the new technologies by Indian developers, or the risk to face cultural and time zone differences when hiring Chinese engineers.

The cost of software development in Eastern Europe and Latin America is quite moderate. Therefore outsourcing to Ukraine, Poland or Mexico can save the American or Western European companies up to 30-50% of the expenses on local hire. The software engineers’ rates are based on the level of developer seniority and expertise, the project complexity, technology stack, and so on.

Note that many web app development services also offer fixed price and dedicated team models for specific types of projects. Thus, you can discuss and pick the most suitable team model from the very start of the project.

One thing is clear: outsourced web & mobile app development enables businesses to find qualified IT professionals within the necessary time-frame and budget. Yet the final choice where to outsource software development depends on too many variables to be universal. You can choose outsourcing destinations with cheap labor if your priority is keeping the cost of your software development low. However, it’s not a good idea to consider price as the only factor.

Eastern European countries such as Ukraine offer the best price-quality ratio for the web & mobile development services. Working with Ukrainian vendors you get well-educated software engineers with a good level of English language and advanced programming skills.

For example at Leobit, 30% of the tech team are developers of senior-level, including professionals with 20+ years of experience in the software industry. One of Leobit’s recruitment criteria is at least an upper-intermediate level of English proficiency which guarantees an effective communication process with its customers. Also, Leobit’s remote team is always ready to adjust the team’s schedule to ensure maximum working hours overlap.

Contact us to get the estimates for your next project.

Tetiana Paratsii
Marketing Analyst at Leobit
You can reach Tetiana
via LinkedIn:
Share on FacebookShare on LinkedInShare on Twitter